A Saxophone Player on Performing and the Love of Music 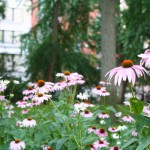 Pink flowers dotting a lawn in in Washington Square Park. 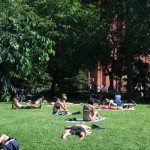 People relaxing on a lawn in Washington Square Park. 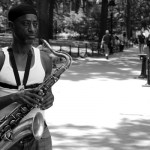 Dusty Rhodes pausing his playing for a moment. 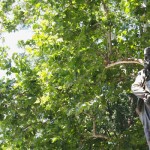 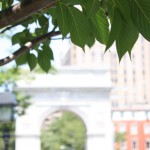 Washington Square Arch in the distance. 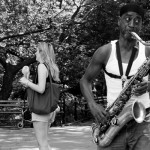 Dusty Rhodes acknowledges an audience member (not pictured) while he plays. 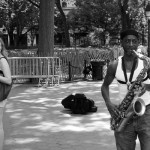 Dusty Rhodes attracting the attention of a passerby. 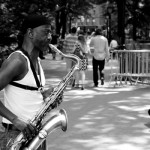 Dusty Rhodes performing an original composition in his section of Washington Square Park.

A busker is a person who performs in public spaces for money—but let it be known that saxophone player Dusty Rhodes is not simply a busker.

“I don’t consider myself a busker; you know, I don’t know what the f*&% that shit is anyway,” says Dusty, never one to mince words. “Busker—you know, they’ll call you anything but a person with a talent that has his own business.”

Dusty’s Rhodes section of Washington Square Park, a quiet circle of trees guarded by a statue of Giuseppe Garibaldi, serves as a quiet reprieve from the cacophony of sounds keeping the park’s center alive. It’s Washington Square Park through and through, but it is simultaneously independent of it. And that’s the way Dusty Rhodes likes it; after all, he is the same way. Dusty is a part of the music industry – he makes money from his music – but he is not owned by the industry. He refuses to enter the mold of street musicians performing interpretations of trendy pop songs, choosing instead to perform original jazz pieces filled with riffs and improvisations.

“I use public spaces as a legitimate platform for my independent art,” he says. And according to Dusty, that’s a rare thing for a musician to acknowledge. The idea of musicians performing exclusively for fame and money is repugnant to him, but he admits that it happens too often.

The center of Washington Square Park is the essence of everything he dislikes: too many performers in search of fame, too much noise and – in his eyes – not enough passion. Thus, one would be hard-pressed to find him by the Washington Square Arch, competing against other musicians for tips. In fact, his tip jar (a saxophone case that has seen better days) is placed farther away from him than the average passerby would expect it to be, especially considering the fact that it holds his daily income. But Dusty Rhodes is a man of the here and the now, content with and absorbed by his space and his sound. He dresses simply: a white tank T-shirt and battered jeans, a do-rag on his head and his saxophone strapped to his chest. Nothing worries him, save for the quality of his art.

Yet some of Washington Square Park’s other acts perform with a different goal in mind: fame, and eventual fortune. For instance, take contemporary breakdancer Cjailon Andrade—better known as “Snap Boogie.” A definitive showman, Snap Boogie was a 2011 semifinalist on the popular reality competition show “America’s Got Talent” and is focused on getting his audience’s attention. His performances are a mixture of skill and charisma laced with the self-promotion of his website, Beauty in the Streets, and the earnest, ballsy appeal for twenty-dollar bills. Snap’s website makes no qualms about his desire for fame and success; the About page of the site makes it quite clear that, “Today, it’s street shows, B-Boy events, parties and performances but one day, the dream is for a Beauty In The Streets Broadway show.”

Snap Boogie’s endgame is his stage name in lights; he performs because he wants to be a star. His hustle is one aspect of his art, but the mere idea of hustle contaminating art is what Dusty Rhodes is so appalled by. Both artists perform for money—there’s no use in arguing that when their tip jars are open and receiving donations. The question is whether or not the Snaps and Dusties of the world are performing for love or selling out. For Jerry, an elderly man who withheld his last name, it doesn’t matter.

“I see nothing wrong with someone who uses their own artistry,” he says. “He’s selling his own talent in order to be compensated for offering something to the public.”

Snap Boogie may see breakdancing in the park as the means to an end (the end, of course, being stardom). If he’s selling out, he’s doing it well—his Twitter handle has over four thousand followers hailing from Los Angeles, Boston, Chicago, and even Canada. But Dusty is content with being a street performer on his own terms. “They [other performers] will sit there and go, ‘Hey, I’m playing this song,’ or ‘Hey, I’m playing that song,’ and it’s no longer about the music—they’re pandering now. Music is something that isn’t a genre, it isn’t an instrument. It’s a feeling.”

For Dusty Rhodes, music is much more than a means to an end. To him, music is also healing, whether for the player or for the listener. Dusty lives and plays by this idea, and so the simple act of healing has become Dusty’s primary motivation for performing. It’s his way of paying it forward, because music healed him, too.

“I had a drunk dependency issue,” he says. “I was on the brink of jumping on the train tracks. To prevent myself from doing that, all I had was a horn, and I was trying so hard not to kill myself. So what I decided to do was make someone else happy, by sharing my pain—and I did. And because I made other people happy, it gave me a purpose. And I got addicted to that.”