It was hard for Valentina Altman not to feel like there was a double standard when one of the boys in her class at Bridgewater-Raritan Middle School got to play soccer shirtless during gym class without consequences last spring. The day before, she was sent to the nurse’s office to change into something school officials considered more suitable than her spaghetti-strap top. 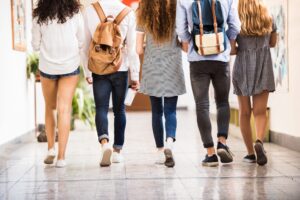 “It makes me feel, like, ‘Oh, this is what being a young girl means in America; it’s what you wear,'” Altman said.

That reprimand happened in 2019, two years before the Bridgewater-Raritan School District’s Diversity and Inclusion Committee board began reconsidering the dress code that some students complained wasn’t fair.

Bridgewater-Raritan Middle School’s conversation and upcoming action on the issue of what kids should and shouldn’t wear at school coincides with the fact that Change.org hosting more than 400 open petitions, created mainly by students, on individual school dress codes.

Currently, at that middle school, shoulder straps on female attire to be at least as wide as a girl’s two fingers; shorts cannot be more than five inches above the knee; tops cropped short enough to reveal belly flesh are banned. To reform the code, teachers Jennifer Edge and Kristia Greenberg, who lead the diversion and inclusion committee’s effort to revise the dress code are listening to and meeting with students and parents.

Marie Trevino, one of those parents, said she is excited about the committee’s work and is looking forward to sharing her opinion. She said she has observed the effect of that dress code on her own middle-school daughter.

Trevino crossed her legs and cleared her throat, then, said, b”This is a very fragile time for these girls, for my girl. They need to feel good about themselves, and adding on a dress code makes it even more difficult.”

While some students, including middle-schooler Altman, are passionate about reforming the dress code, other students could care less. Or, like, Middle-schooler Charlene Cai, their opinions differ from Altman’s. School is a professional setting and the students should dress as such, Cai said.

“… If you don’t dress sexy, you don’t get sexualized,” Cai said, adding that the current dress restrictions are acceptable for people her age.

During the upcoming meetings, participants will be asked to answer questions such as “What is provocative?” and “How do we differentiate between professional dress codes and ones that affect students?”

The teachers who are leading that discussion declined to comment about that subject to The Spectrum.